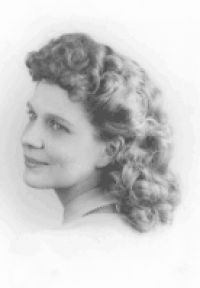 Violet Peoples Pisor, who taught fifth graders in Westerville, Ohio, for more than twenty years, died in Northport, Michigan, 1 September 2013, at the age of 97. ”Vi” was born on a farm near Huntsville, Ohio, on 25 September 1915, and rode a horse-drawn kiddy wagon to school in winter. She graduated from North High School in Columbus where, sitting in a class of P’s she met Charles Trudeau Pisor, the apple of her eye. She won her teacher’s certificate at Bowling Green, taught school in Tiro for three years, and picked her apple in June of 1938. Schools did not permit married women to teach, so she followed her husband to U.S. Army military bases and to the artillery training school at Ohio State University. Her husband, an artillery officer, her brother, her husband’s sister and her husband, served in World War II. Vi and Trude Pisor moved to Westerville, Ohio, in 1957, seeing their three sons, Robert, Nick, and Kim off to college. Vi’s teaching opportunity came in 1960 when Westerville hired new teachers to handle overflowing classrooms. ”They gave me 28 kids on the stage in the gym, with the curtain pulled, ” she remembered. ”We never had normal light that room, and the gym classes were going all day, and it was also the school lunchroom…. But I liked the kids. I just think kids are fascinating. I like their minds.”
Violet Pisor returned to school in her fifties to earn a degree with honors at Otterbein College. She was an active member of the Central College Presbyterian Church for forty years, and volunteered to help at the Thrift Shop at the college and at Hanby House in Westerville. She loved the colors red, and purple, wrote perfect Palmer, and cheered for Ohio State every Saturday. Violet believed she was descended from French royalty, that her family name had once been Violette, and who are we to say no? She is survived by her sons Robert and Kim and their wives Ellen and Nancy, by five grandchildren and eight great grandchildren, and by good memories from us all. Private interment, Huntsville, Ohio. A Celebration of Life Service will be held 11:00 a.m. Friday September 27, 2013 in the Ellsworth Chapel at Central College Presbyterian Church, 975 South Sunbury Road Westerville, Ohio. Arrangements by the MORELAND FUNERAL HOME, Westerville, Ohio

am a member of central college church
I well miss you VI Pisor.
God be with your family.
love shelby brown

Dear Bob and Ellen: So saddened to read of your mother’s passing. I was surprised by your ties to Westerville through her. I wish my teaching years had over lapped with hers so I might have known her. She was a special lady. Thinking of you and all of your family with deepest sympathy, Diann Doudna Bowman (College of Wooster ’64…widow of David Bowman ’62)