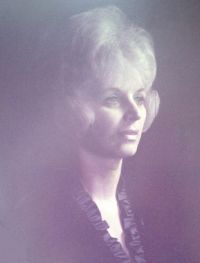 Shirlee A. Blum, 83, of Crestline, passed away peacefully on Saturday November 9th, 2013, after a sudden illness. She was surrounded by those she loved most, her children and grandchildren. She was born August 16, 1930, Shirlee Ann Zwahlen to the late John J. Zwahlen and Thelma M. (Long) Zwahlen. A graduate of Crestline High School class of 1949, she married Harold R. Blum May 29th, 1949. They celebrated 60 years together before his death on her birthday in 2009. A member of United Church of Christ in Crestline, she sang with the choir and belonged to many church organizations. Along with Harold, she was a youth group advisor for many years and loved working on the annual Christmas bazaar. For over 30 years, she arranged alter flowers and helped coordinate seasonal decorating of the church. An active community member, Shirlee belonged to the Patio Gardeners Club where she formed life-long friendships. She served on the Crestline Hospital Board as Board Member and Chairman from 1983-1992. She and Harold also served Meals-On-Wheels to area shut-ins. Shirlee was a devoted friend and giving neighbor. Shirlee kept busy in many endeavors like painting, clay sculpting, and room design, and also taught classes in basket weaving. Her love for entertaining was obvious by her great menus for parties and holiday gatherings. Left to cherish her memory are son Gary (Gretchen) Blum, Shelby; Sally (Ross) Long, Delaware; granddaughters Katy (Scott) Smith of Crestline; Jenny (Brad) Terman of Columbus; Maggie (Brian) Phillips of Shelby; Emily Weithman (Patrick Butler) of Los Angeles, CA. She leaves two great-grandchildren, Sarah and Tyler Smith of Crestline. She also leaves behind 3 sisters-in-law, Carolyn Zwahlen of Larkspur, CO., Dorothy Blum of Crestline, and Shirley Kondo of Cleveland, and many nieces and nephews. Along with her parents and husband, Shirlee is preceded in death by: her brother Jack J. Zwahlen, half-sister Jerry (Zwahlen) King , brothers-in-law Charles Blum, Ken Kondo, brothers-in-law and sisters-in-law Margery (Blum) Palmer and Robert Palmer, Miriam (Blum) Bush and Chester Bush and niece Joanne Bush.
A memorial celebrating her life is being planned for December and will be held at United Church of Christ in Crestline.