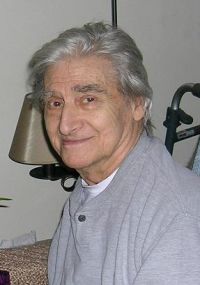 Prosper Roland Stipek, age 99, of Dublin, Ohio, Friday, November 14, 2014. Prosper Roland Stipek was born in North Bergen, New Jersey on December 21, 1914, the third child of John and Emma Stipek. He died in Dublin, Ohio on November 14, 2014, thirty-seven days before his 100th birthday. He was employed at the Spencer Kellogg Refining Company in Edgewater, New Jersey from 1933 until 1944 and thereafter with National Biscuit Company, (Nabisco) in Manhattan. He retired from Nabisco in 1977. He lived in New York City and Patterson, New Jersey until 2004 when he moved to Dublin, Ohio to be near family. In the century since his birth, Prosper saw great changes in the world; the First World War, women’s suffrage, the first commercial radio station, Lindbergh’s flight, silent films and talking motion pictures, prohibition, the stock market crash of 1929, the Great Depression, World War II, atomic energy, television, computers, the Korean War, the new states of Alaska and Hawaii, the interstate highway system, central air conditioning, Sputnik, the Cuban Missile Crisis, the Civil Rights Act, the Vietnam War, Neil Armstrong on the moon, home computers, mobile phones, and so many more things that we take for granted today. Although he lived through a century of change, Prosper remained constant in his life. He will be remembered as a sweet and gentle soul, unassuming, quiet, never wanting to cause a problem or be a burden. He requested nothing for himself and was not interested in accumulating material things. He was a minimalist in the best sense of the word and was most comfortable living his life quietly at home. When asked if he needed anything, his softly spoken response was always thank you, no, he had everything he needed. He enjoyed noodling on the piano, especially his favorite “Nola”, and listening to National Public Radio. He preferred the mobility that radio allowed him over sitting in one place to watch television. He could have a twinkle in his eye and his quiet sense of humor always lurked beneath the surface. He once suggested that the reason Cleveland’s baseball team had been called the Spiders before becoming the Indians was because the Spiders caught flies. He loved his back massages, a little coffee in his milk, and almost any kind of soup imaginable. The opportunity for his family to share the last ten years of his life in Ohio has been a joy for all of us. Prosper was predeceased by his parents, John and Emma Stipek; sister, Mildred Grace Stipek Travis and brother, Sylvan John Stipek; nephew James Russell Stipek and niece, Lorraine Carol Gugel. He is survived by his niece, Madlon Travis Laster and husband James, of Winchester, Va; nephew, Alan C. Travis, and wife Fiona, of Dublin, Ohio; niece Lynn Thompson and husband Richard of Columbus, Ohio; nephew Robert Sylvan Stipek, and wife Anne Maria, of Massachusetts; and nephew Alan John Stipek, of New Jersey. He is also survived by great nephews Todd A. Travis and wife Anita of Upper Arlington, Ohio; Craig S. Travis and wife Heather, of Hilliard, Ohio; James Travis Laster, and wife Rebecca, of Delaware; Erik Albert Gugel and Matthew Sylvan Gugel of New Jersey; Bryan Stipek and great niece Ashley Marie Stipek of Massachusetts, and by great-great nephews and nieces, Nathan Craig Travis, Clayton Joseph Travis, Helen Grace Laster, Wells Hayden Laster and Jamie Adeline Laster. The family extends their appreciation to the staff at The Sanctuary at Tuttle Crossing in Dublin where Prosper lived for the past ten years. The friendship, support and care that everyone provided was very meaningful to Prosper and to his family. “Live Long and Prosper.” The family will hold a private burial service. Arrangements by MORELAND FUNERAL HOME, Westerville, OH.