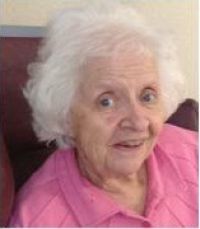 Nellie M. Emfield, 83, December 5, 2013, at the Manor Care Health Center in Westerville from complications of Alzheimer’s disease. Born in Columbus, Ohio on June 30, 1930 to Marie & Forrest Armstrong. She was an East High School graduate and was employed by Columbus & Southern Ohio Electric Company before her marriage to Norman Emfield. Survived by brother, Wayne Armstrong and sister-in-law, Linda Armstrong; nephews, Steven (Kim) Armstrong, Thomas (Deborah) Armstrong, and Eric Armstrong and niece, Susan Armstrong; great nieces Kree Armstrong, Claire Chirillo, and Katie Bennett; grandson, Daryl Emfield and granddaughter Rachel Emfield, and daughter-in-law D’Anne Emfield. Preceeded in death by her son, Douglas and husband, Norman. Nellie loved to shop, read, plant a garden and especially cook for and socialize with her family and friends. She enjoyed her 2 cats for many years. Nellie was always a smiling bright light at the Manor Care Health Center and will be missed by all who knew her. A memorial service will be held at MORELAND FUNERAL HOME, 55 East Schrock Road, Westerville, OH, Thursday, December 12, 2013 at 10:30 a.m., Dr. David Hogg, officiating with interment at Sunset Cemetary, Galloway, Ohio. In lieu of flowers, family requests contributions to the Alzheimer’s Association (www.alz.org) or to the Alzheimer’s wing at Manor Care Health Center in Westerville, Ohio. The family wants to express sincere appreciation to all the workers who helped Nellie during her stay at the Manor Care Health Center and especially to the Heartland Hospice nurses and pastor who ministered to Nellie over the past months.

My deepest sympathies to the Emfield family. Nellie, Norm and Doug lived down the alley from us growing up. Whenever we could not find mom (Genny), we just had to look down the alley as Nellie and Mom would most likely be hanging out over the fence at Nellie’s! (I used to tease them that they were like the comic strip characters “Elviney and Loweezy”- from the Snuffy Smith comic strip – who hung out at the gossip fence.) We all loved Nellie, and are saddened by her passing….
Julie Tufano