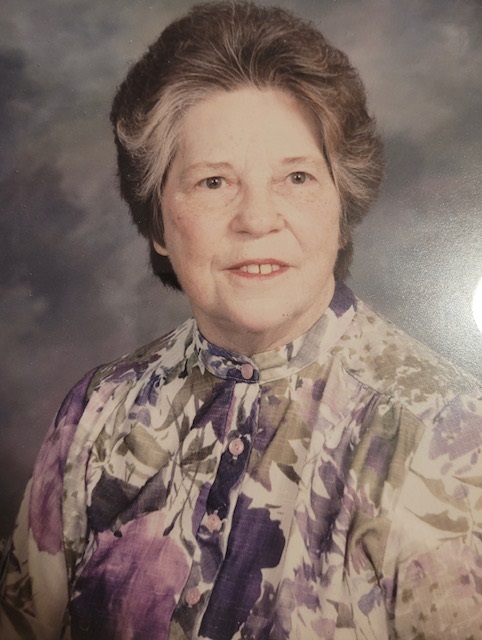 Mary Genevieve "Genny" Wright Palmer, 96, was escorted into Heaven by her Lord and Savior, Jesus Christ. This blessed event occurred on Thursday, November 24, 2022, at her residence in Buckeye Terrace Rehabilitation and Nursing Home Center, Westerville, Ohio. Genny was born January 5, 1926, Columbus, Ohio, the second child of Clarence Earl and Eda Caroline (Monroe) Wright. Genny graduated from Marion Harding High School in the class of 1944 and went on to attend Ohio State College. Genny also contributed to the WWII war effort by working at the Marion Ordinance on Route 309 in Marion. Genny then got a job at F&R Lazarus where she worked for over 30 years. After leaving Lazarus, she worked at BGoodmans, Walmart, and MedCenter Hospital where she retired. Genny met and married her husband, Gough Joseph Palmer III, while working at Lazarus. The couple had four children: Michael Palmer, Patricia Joan "Patti Jo" (Ken Browsher) of Delaware, Peggy Jeanne Palmer (Delaware), Gough Joseph Palmer IV (Johnstown). Genny is survived by her brother, Kenneth Lee Wright (Janet) of Richwood, three children, five grandchildren, eight grandchildren, and many nieces and nephews. She was preceeded in death by her husband, son (Michael), parents, two siblings, Clarence Monroe Wright (Alice Jeanette Roberts) and Ruth Carol Wright Rengert (Donald Roscoe), as well as two nieces, Susan Kay Wright Wilcox and Penny Candy Wright Throckmorton. Genny had a passion for sewing and made all types of clothing from wedding dresses to costumes, as well as knitting and crocheting. She delighted in planting flowers in her garden when she wasn't working or spending time with her family. Genny was a dedicated and fun mother who taught her children many life lessons and values with lots of prayers thrown in! She attended Grace Brethern Church of Marion and Miller United Methodist Church in Johnstown. Genny served on several church boards while at Miller Church. Family and friends may pay their respects during calling hours on Saturday, December 3, 2022, from 10:00 AM to 11:00 AM at the Moreland Funeral Home located at 55 Schrock Road, Westerville, Ohio where a funeral service, officiated by Dr. Calvin Alexander, will be conducted at 11:00 AM. A funeral procession will commence upon completion of the service, traveling to Green Hill Cemetery in Johnstown, Ohio, where Genny will be laid to rest beside her husband, Gough III. All family and friends are welcome to a luncheon to be hosted by Miller UM Church on St. Rt. 62 following the graveside service. The family would like to extend a special thank you to the staff, mangement, and hospice of Buckeye Terrace for their care of Genny the past eleven years. They would also like to thank Pastor Cal for his support and assistance, as well as, the Moreland Funeral Home for taking care of Mom (Genny). The family requests donations be sent in her name to the Alzheimer's Association or a cancer research association of your choice.