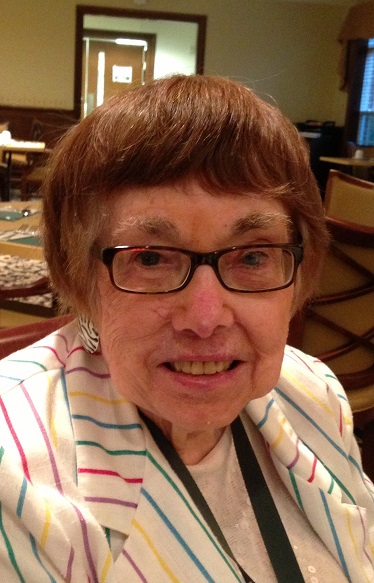 Irene Rowan Koval was born on April 1, 1926, in Girard, Ohio and passed away peacefully at Parkside Village, Westerville, OH, surrounded by her loving family on March 18, 2016, after a valiant struggle with Lewy Body Dementia or Progressive Supranuclear Palsy. She was the daughter of Anna Bozick Rowan and John Rowan, Slovenian immigrants who settled in Northeastern Ohio. She graduated in 1944 from Girard High School where she excelled in academics and was active in music and drama. She graduated “summa cum laude” from the University of Mount Union (Mount Union College) with majors in English and Spanish. At Mount she was a member of Alpha Lambda Delta freshman honorary and Pi Gamma Mu Social Studies Honorary. Other honors included the Ramsayer Sophomore Prize, the McMaster Junior Prize, the Smith English Prize and the Alpha Lambda Delta Book Award. She was selected for membership in Psi Kappa Omega, a Mount Honorary. After doing her practice teaching at Mount Union (which included tutoring the football team), she accepted a position as English teacher at State Street Junior High School in Alliance, Ohio. While there, she was in charge of the newspaper, the annual and other activities. Wishing to teach Spanish, she spent a year at the University of Cincinnati where she wrote her thesis, passed her oral exam and received the Master of Arts Degree. She returned to her former position in Alliance and when an opening in Spanish occurred in Alliance High School, the job was hers! She married a Mathematics teacher, Paul Koval, and they remained in the Alliance school system for several years. Irene was active in the American Association of University Women and in the Presbyterian Church. She was initiated into Delta Kappa Gamma, a women teachers’ honorary. She organized a Spanish Club and Spanish National Honor Society at Alliance High School. It was in Alliance that her two children were born. Most of her 25 years of teaching were spent at Dover High School in Dover, Ohio, where the family moved. She accepted the teaching position in Spanish and headed the Foreign Language Department there for several years. Students enjoyed the activities of her Spanish Club. Her love of travelling led her to taking numerous student excursions to Spain and Mexico. As a result of her mentoring, several students have become Spanish teachers while others entered careers where language facility was a must. She retired in 1985 after 25 years of service and was a member of the Retired Teachers Association of Tuscarawas County. She was a member of College Club, the New Philadelphia Women’s Club, Alpha Kappa chapter of Delta Kappa Gamma and was an active member of the Women’s Society of the Presbyterian Church where she also served several terms as a Deacon. She spent her golden years in the Columbus area where she could be near her children and grandchildren. They travelled together to Europe several times to discover their “roots.” She enjoyed the fellowship of Central College Presbyterian Church and its Presbyterian Women. She kept busy as a circle leader, volunteer, baker, and occasionally, a teacher. She was selected for an Honorary Life Membership in Presbyterian Women. She was a very active member of the CCPC Prayer Shawl Ministry, crocheting countless shawls and scarves for the ill and homeless. She baked thousands of cookies every year for the PW Cookie Walk. She was also a member of the Wednesday afternoon Bible Study. She was a member of the Blendon Township Senior Center. In addition to her parents, she was preceded in death by her husband of 45 years, Paul Koval, in 1997. She leaves behind her son, Paul J., and his wife, Lisa Koval and grandchildren Elyse, Jillian, Jacob and Eden Koval, and daughter, Dr. Ann R Koval and her husband, Jeff Wakefield and grandson, J. Drake Wakefield. Friends may call at the MORELAND FUNERAL HOME, 55 East Schrock Road, Westerville, from 4-9 p.m. Tuesday, March 22. Her Funeral Service will be held on Wednesday, March 23, 2016, at 11:00 a.m. at Central College Presbyterian Church, 975 South Sunbury Road, Westerville, Ohio. Additional visitation will be held at Toland-Herzig Funeral Home 803 N. Wooster Rd., Dover, OH on Thursday, March 24th from 11 a.m. to 12 noon. A private burial will take place in Dover, OH. In lieu of flowers, donations may be made to The Clabaugh Glaucoma Research Fund (#601265) OR The Thomas F. Mauger and L. Carol Laxson Endowment (#664490) funding Corneal Transplant research c/o The Havener Eye Center, 915 Olentangy River Road, Columbus, OH 43212 and Central College Presbyterian Church-PW or Chancel Choir funds. Her family wishes to thank the Staff of Parkside Village and VITAS Hospice (especially Mindy M and Brandy N) for their loving care throughout this devastating illness.

Paul and family,
Sorry for your loss, it’s never easy. Your mom’s spirit will be with you always. You and yours are in my thoughts and prayers. Take care.

Paul and Anna
I am sorry for your loss. Your mom is in God’s arms and she is looking at you with a smile in her face. I have not met your mother personally but I have followed her medical progress over the last few years. She was a remarkable woman who left a legacy to remember her. Your families are in my prayers.