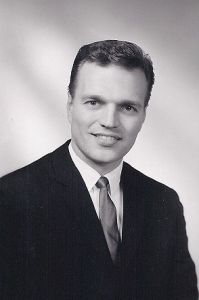 Jerry Keifer, ag 75, of Gahanna, formerly of Westerville, passed away at his home in Gahanna on Thursday, February 18, 2010. He was preceded in death by his parents and sister, Judith McCoy. Jerry was born in Chicago, Illinois, on November 3, 1934, to Frances J. and C. Dale Keifer. The family moved to Dayton, Ohio, where Jerry attended public schools, graduated from Fairmont High School and attended the University of Dayton. He joined the Army, spending two years overseas stationed in France. He returned to Dayton and worked for NCR then moved to Dallas, Texas, where he was a graphic designer at Texas Instruments. It was there that he met and married the former Dana Sauer. After several years in Dallas, they moved to Dayton where Jerry began working for Honeywell, Inc.. In his 32 years with Honeywell, he served as Account Executive, Regional Automation Specialist, Sales Manager and Branch Manager in Dayton, Cincinnati, Philadelphia and Columbus. Jerry is survived by his wife, Dana; two sons, Jeff and his wife Laurie and Greg and his wife Laurie; five grandsons, Kyle, Matthew, Haiden, Reed and Maddox, all of Gahanna and Westerville. In lieu of flowers, the family requests, for those who wish, that memorial contributions be made to the American Cancer Society 870 Michigan Ave. Columbus, OH 43215, the Alzheimer’s Association 3380 Tremont Rd., Columbus, OH 43221 or the organization of their choice. The family wishes to express heartfelt gratitude to Heartland Hospice for their care, compassion and support. A memorial service will be held at the MORELAND FUNERAL HOME 55 East Schrock Road, Westerville, on Thursday, February 25th at 3:00 p.m. with visitation one hour prior to the service.