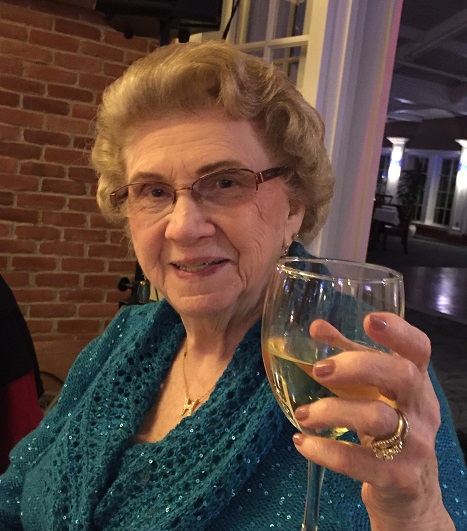 Blanche S. "Skip" Harrison, passed away peacefully of natural causes, surrounded by her family on September 29, 2022. Born in Bladen County, NC on September 8, 1927, she was raised in Dunn, NC and lived in Raleigh, NC. At the tender age of nineteen, she first set eyes on a young Navy war veteran named Sam Harrison, after she was encouraged by a mutual friend to meet him. Their first meeting was in a hospital, where Sam lay wrapped in gauze, following a burn accident. Initially, Blanche claimed to not be interested. But a short time later, while she was working as a hostess and bookkeeper for a local diner, a clean shaven, well dressed, handsome Sam walked up and reintroduced himself, and they were inseparable from that moment on. They were married in 1947, bought a house, and raised a family. In February of 1965 they packed up everything they owned and moved from Raleigh, NC to Worthington, Ohio, in furtherance of Sam's career. She supported him in his career and was devoted to him up until his sudden death in May of 1985.

Following her husband's death, Blanche lived independently in her home in Worthington for most of her life, where she hosted family events and holiday celebrations. She always had a bowl of bite sized Snickers on the side table and beverages in the fridge for anyone who might stop by. Blanche was known for her "Southern Charm" and accent. One could not leave her house without hearing the familiar, "won't you people come in?" followed by her offering everything in the fridge and cabinets for refreshments. She was a spitfire with a feisty approach to life, which she maintained up until the very end. She never missed a Friday afternoon hair appointment with Joyce, loved to celebrate the birthdays of others by going out to dinner and enjoyed listening and laughing along to family stories. She was supportive, kind, patient, witty, and had a quick sense of humor. She made people feel welcomed and loved. On Valentine's Day of 2022, Blanche moved into an apartment at the Feridean Commons Senior Housing in Westerville, Ohio. There she made many friends with the residents and staff who made her life safe, comfortable, and fulfilling, through the Staff's kindness and dedication to her care.

Friends may call at the MORELAND FUNERAL HOME, 55 E. Schrock Road, Westerville, OH on Thursday, October 6, 2022, from 6:00 to 8:00 PM with a memorial and prayer service from 7:30 to 8:00 PM. In lieu of flowers, friends may contribute in her memory to Capital City Hospice through The Hope Foundation at www.capitalcityhospice.com/donate/