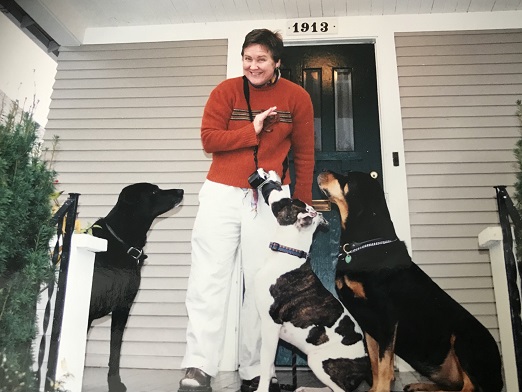 Corrie was born on May 6, 1962 in Suffern, NY to Thomas James Fulton, Sr. and Beverly J. Fulton (nee Kessler) (deceased). She is survived by her siblings, Rian Fitzpatrick and brother-in-law, Neil Fitzpatrick of Westerville, Ohio, and Michael Mackay and sister-in-law, Michele McVicker of Coatesville, PA. Corrie was pre-deceased by her beloved sister and brother, Cameron Fulton and Thomas J. Fulton, Jr. respectively. She will be dearly missed by her niece, Megan (Matt) Straley and nephews, Kyle (Kelli) from the Fitzpatrick family and Andy (Amanda), Johnny, Matthew, James and Kevin from the Mackay family, and great nieces and nephews, Declan and Graham Fitzpatrick and Leo and Ruby Mackay. Her two cats, Delores and Minerva.

Corrie had a great love for animals and especially for those that became a part of her family through the years. She had an adventurous spirit that brought her to Germany as an au pair when most of her high school classmates were starting college or careers. Corrie became a graduate of Sarah Lawrence College and she eventually moved to the Seattle area and fell in love with her new lifestyle and friends. Due to health issues Corrie came to Westerville to be closer to her family where she continued to make new relationships and friends. Corrie left a lasting impression on the friends and family she is leaving behind. She had an originality in her way of reaching people that may have seemed quirky but was always sincere, honest and affectionate. Her individuality extended to her personal style, her taste in art and her way of expressing herself.

Corrie will always be remembered by her friends and family as a true original. She will be missed greatly. In lieu of flowers, the family asks that a donation can be made to the Juvenile Diabetes Research Foundation (JDRF) or any local animal shelter of your choice.

I am sending a letter to Rian this week.